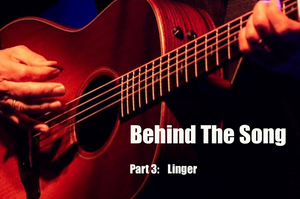 The third in a short series of stories behind the songs.

This one is 'Linger' from Tim Sheppard

Then, he challenged us to become just like Joshua by especially devoting 2018 to God as a year of lingering.

As I began to spend more time alone with God than ever before, a song idea was born. The title would be “Linger.” I considered a lyric line about lingering in the Sanctuary…waiting in the Upper Room. The more I meditated on this, I realized that God Himself is our Sanctuary; He is our Upper Room.

Soon after this, I was asked to cowrite with Ethan Hulse, an amazing songwriter from Nashville. I shared the “Linger” theme with Ethan. He immediately resonated with it, and within less than an hour, we wrote “Linger” together.

Lingering is our response to God’s invitation to commune with us. It is born out of a deep, unquenchable desire to know Him. The One who formed us from the dust and breathed into our nostrils the breath of life, the One who spoke to Moses from a burning bush, the One whose presence overwhelmed Isaiah with his sin and unworthiness, the One whom the saints and angels now continuously worship before the Throne, tore the veil so we can enter in.

This same God invites us to lean upon His chest. How could we possibly ignore this invitation of all invitations? The All-Sufficient One who lacks nothing, who is completely set above and apart, not only by His purity, but also by His very divine nature, this One who is in a class all His own, has built a pathway into His presence so we can be overwhelmed by the sheer joy of knowing Him. Nothing else…nothing less.

I invite you to watch and listen to “Linger” HERE or by clicking on the above image. You can also purchase the song as part of Gateway Worship’s new “Greater Than” live recording by going HERE