Behind The Song - Part 1 - While You Are Sleeping 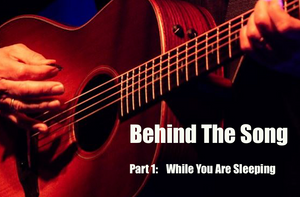 The response to my song, “While You Are Sleeping” has been very encouraging.  My live performance of the song from Gateway Church has had over 100,000 views on their Facebook page.  It has been released as a deluxe single by Gateway Publishing, including a version sung by myself, a version sung by Melissa Jackson, and an instrumental version.  I’m delighted to see that it is being listened to across the world now.

As I considered my own struggles with sleep, I began to see that there is an epidemic of sleeplessness and anxiety in our world at present.  Many have messaged me referring to fears, night terrors, and information overload as contributing factors that make getting enough rest and sleep difficult.  I believe this song was given to bless people with sleep and rest.  I’m hearing from people around the world who are being helped when they listened to “While You Are Sleeping.”  A pastor from Texas who hadn’t been able to sleep more than four hours a night for six years started sleeping eight hours the night he listened to the song.   A young lady in Delaware who struggled with fear and an inability to sleep due to past abuse writes that finding the song helped her experience peace, sleep and an absence of fear.  A mom in New Zealand wrote that her baby hadn’t slept in months but has been able to go to sleep while listening to the song.  Most song writers don’t want their songs to put people to sleep, but in this case that’s exactly what I hope my song will do!

I’m hearing that the story behind the song I used to introduce it at Gateway Church is helping people find faith to believe that God really does promise His beloved sleep (Psalm 127:1-2).  Reading a promise and believing a promise are not the same.  It helps build our faith to believe that God keeps His promises.  I can tell you personally that He does.  You can read more about my struggles with sleeplessness in a previous blog at www.waynedrain.com.  “While You Are Sleeping” came to me in the middle of the night as a sort of modern-day confirmation of Job 35:10. Why don’t you pause and go read my story and listen to the song right now.  I’ll wait for you.

My friends Noel Richards and Tim Sheppard were given co-write credits for the song due to significant contributions in musical and lyrical arrangements.  Both are seasoned song writers as well. I have invited Noel and Tim to join me in writing their stories behind the songs they have written along similar themes of peace, rest or healing found in God’s presence.  We will tag team giving more stories behind the songs for you in the weeks to come.  It is my hope that these stories will be an encouragement to you that God still speaks to those who seek Him.  And may you ‘know in your knower’ that He keeps His promises.